This is a good example of hull with and without the manufacturer logo, which usually is in the best spot for your boat lettering.

“Beach Party” was the first of a series of seven related AIP beach party films. The others are Muscle Beach Party, Bikini Beach, Pajama Party, Beach Blanket Bingo, How to Stuff a Wild Bikini and The Ghost in the Invisible Bikini.

An anthropologist, Professor Robert Orville Sutwell is secretly studying the “wild mating habits” of Southern California teenagers who hang out at the beach and use strange surfing jargon. 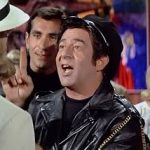 After he temporarily paralyzes Eric Von Zipper, the leader of the local outlaw motorcycle club, who was making unwanted advances on Dolores, she develops a crush on the Professor.

Von Zipper and his gang plot to bring down Sutwell, only to be thwarted in the end by the surfing teenagers. 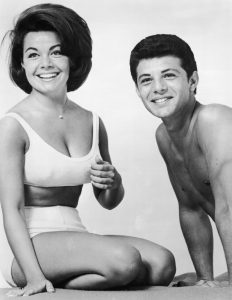 “We were constantly filming,” says Avalon. “We were doing 28 setups a day. I would say to Bill Asher … ‘I don’t think my character Frankie would say this.’ And he’d say, ‘What are you talking about? Just say the line. Let’s have fun with it.’ “[13]

We all had to wear body make up because nobody had a tan. One day Frankie and I had some dialogue to do on our way to the water with our surfboards. It was colder than hell that day and the water was freezing. We had our backs to the camera and Frankie said, ‘Man, can you believe us? Two thirty year old guys in body make up playing teenagers.’[12]

Although Mickey Dora was Bob Cummings’ stunt surfer for long-shots, Cummings was already a competent surfer himself by the time he starred in Beach Party as the ungainly Professor. Films of him surfing in Hawaii on the Ken Murray’s Hollywood television show feature a muscular young Bob cruising along comfortably on an old style long board.[15] 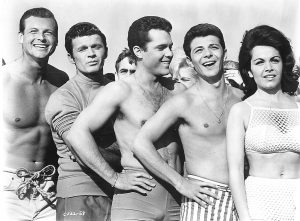 Contrary to the popular opinion that Annette Funicello was not allowed to be seen in a bikini bathing suit in these films for AIP (or that she was not even allowed to wear a two-piece suit or show her navel), Funicello does indeed wear a pink two-piece in this very first film, shows her navel in a two-piece in Muscle Beach Party, and wears a bikini in Bikini Beach.

In one of the first instances of film cross-selling, AIP took advantage of the target demographic of this film to pro mote another in a different genre, when at the very end of the credits – after giving “A Special thanks” to Vincent Price for appearing as Big Daddy – the title reads “Soon to be seen in The Haunted Palace“, a AIP horror film that would be released on August 28, 1963 – just weeks after the release of Beach Party. Price’s line, “The Pit… Bring me my pendulum, kiddies, I feel like swinging…”, is a jocular reference to AIP’s 1961 Price vehicle, The Pit and the Pendulum, directed by Roger Corman.