Send photos of all areas of the vessel where your boat name might appear and you can see virtual previews that may help drive your final choice in a custom graphic.

Pop quiz: on the house, because the house curves, the best measurements to provide for scale on a photo like this would be

b) the distance between that stripe and where the fairing begins

c) the width of the previous name before we removed it with photoshop.

d) put two pieces of tape in the area and measure between them.

If you answered d, you would be correct! Even on the transom shot.  It’s easy to see the blue tape on the transom and we’re centering in an area without obstructions.  The photo is at an angle so perspective skews any measurement accuracy, but it’s not critical because it’s wide open.

a) 3″ isn’t enough to guage the scale over and area this large
b) it’s difficult to see where exactly the fairing begins, a piece of tape would help and can be easily removed after the photo is scaled.
c) too much room for human error…d is a better choice.

Legend has it that in the late 18th century, General Moses 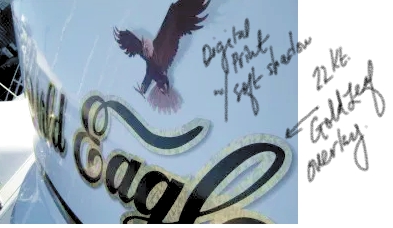 Cleaveland and his group were surveying the areas of the Northwest Territory.  As they passed through Buffalo, they encountered a group of Native Americans.

See the customers actual working page at
https://marinegraphics.com/wildeagle where the boat lettering was refined to what we ended up installing here.

The most boisterous of the group was referred to as ‘Wild Eagle’.  As Cleaveland and his group left the Buffalo area, ‘Wild Eagle’ in his curious nature, followed them until they came upon the ‘crooked river’, where they knew they could plan a city, which was appropriately named Cleveland.

The map was drawn around present day Public Square and included Superior, Ontario and Huron streets.  As ‘Wild Eagle’ watched in secrecy, he soon decided to settle in on what is now present day Huron Road. He quickly became known as the most uncontrollable, wildest incomer of Cleveland, yet the people of the area could not get enough of his unruliness.

Today we pay tribute to his defiant accolades through the Wild Eagle Saloon.